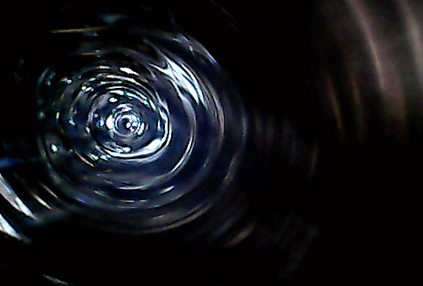 
making use of miniature camera technology, this collaborative work developed by Elizabeth Ditmanson & Gavin Osborn explores threshold intersections of light & sound from an unusual perspective; a luminous property of the mechanical body, glimpsed illuminations & shadow sounds from a hidden space... 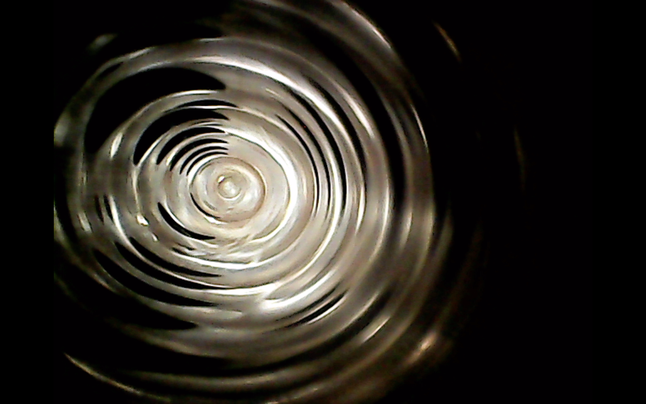 abaton | limen uses internal & external light in relation to an actively-played flute & its sounds in relation to projected video to explore the concept outlined above.  the following elements were used:

process: in performance, duties are divided between the camera operator (elizabeth) & the flautist (gavin), who also turns the external LED lights on & off.   the flautist is responsible for the performed sound (including spoken text), the camera operator is responsible for very finely-tuned live dimming, brightening & other operations of the camera.  these two separate activities must operate together as a chamber performance - this is exactly a duo performance in tandem, not flute plus technician.

in making:  the making process was entirely collaborative: although both creators worked individually on elements of their separate duties, sounds, video options, lighting options, compositional structure, aesthetics, performative aspects, & everything else were evolved collaboratively through workshopping & discussion.
​ 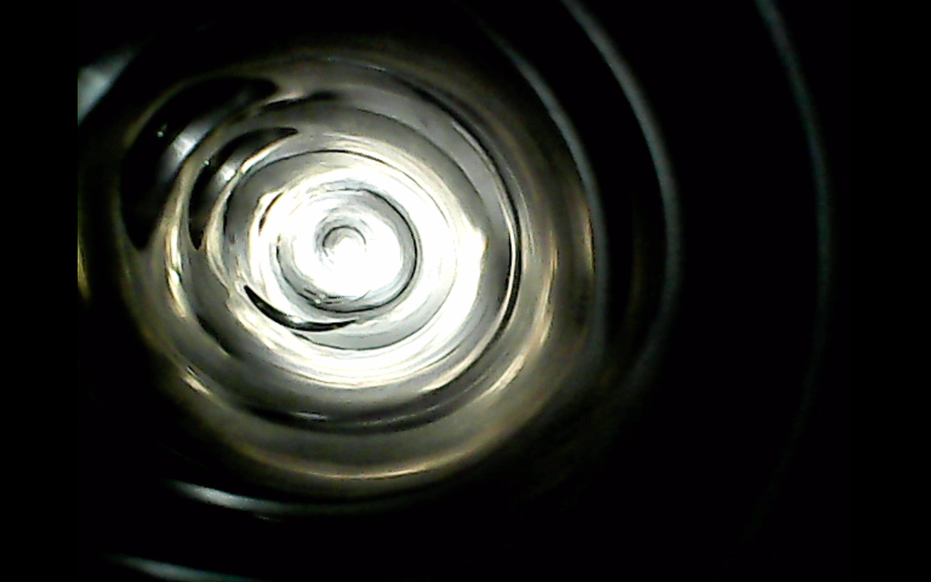 ​text: ​the following text was developed: 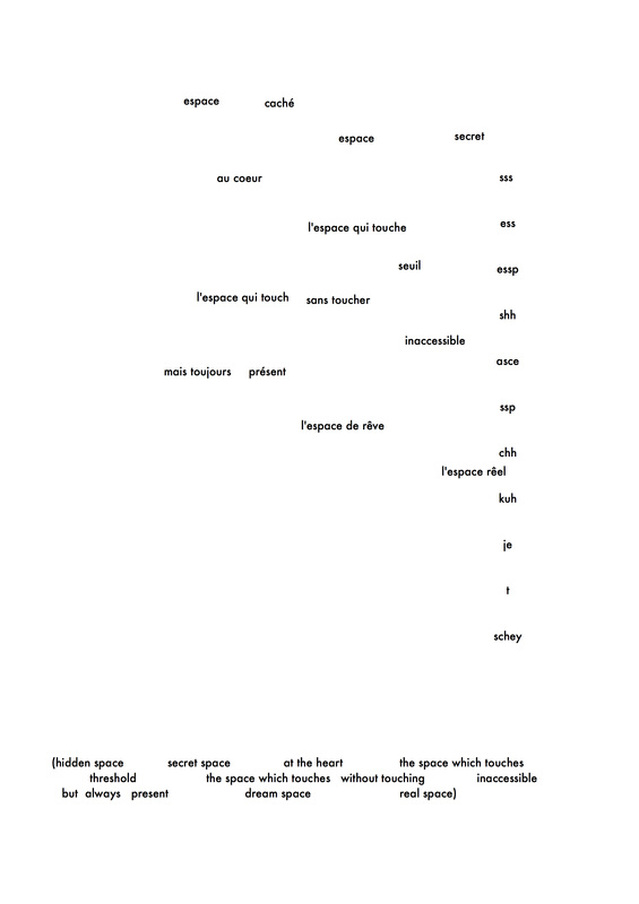 ​score:  this is the final version of the score: 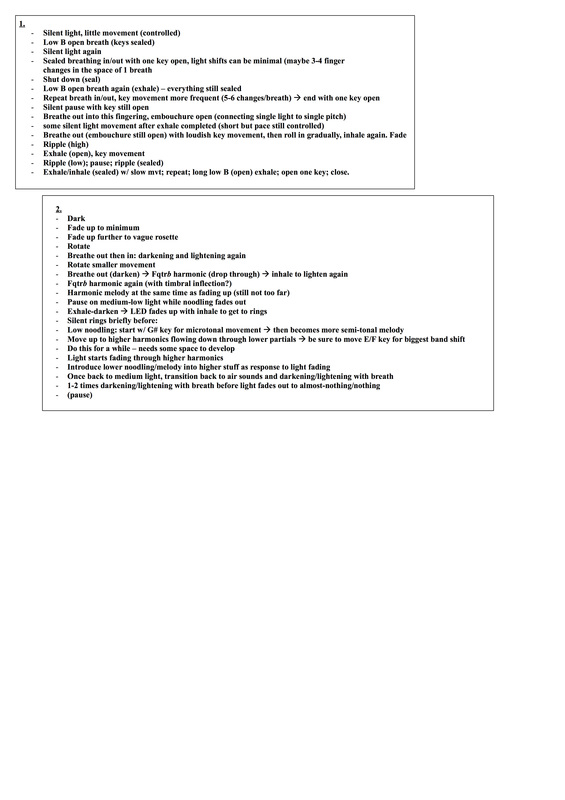 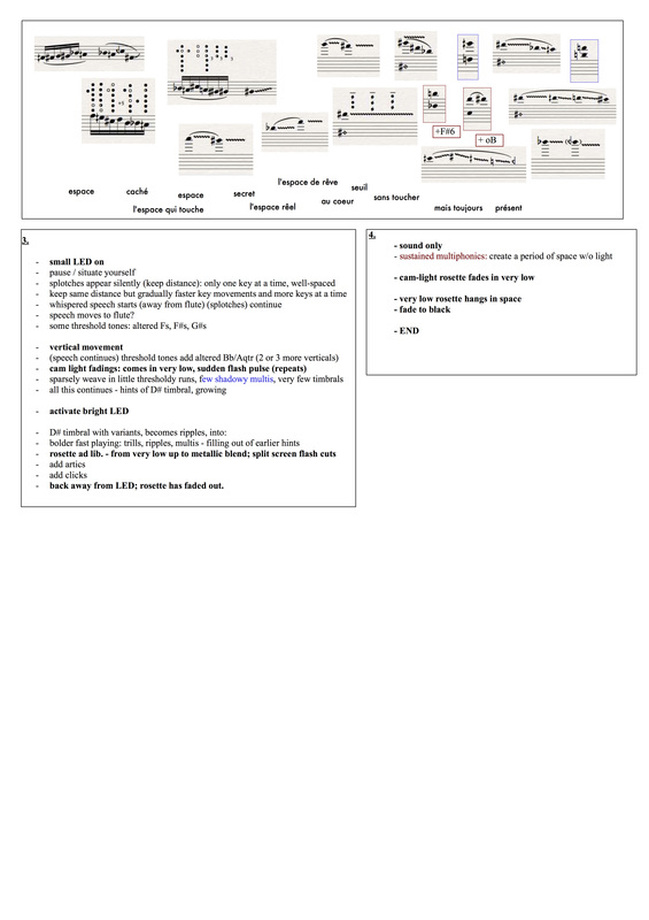 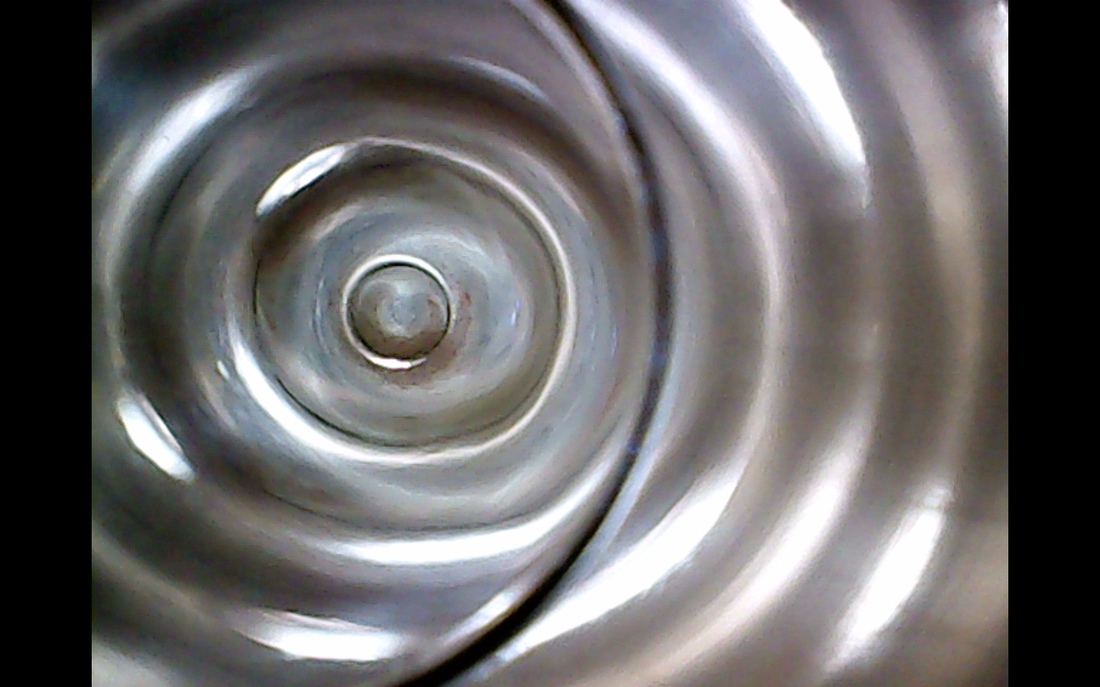 endoscope LEDs: the endoscope camera is tipped with 4 LEDs; these are controllable via a dimmer wheel on the cable, & have a range from dark, to extremely dim (producing a beautiful silver rosette on screen), through various medium settings, to very bright (rarely used, as it makes the interior of the flute very clear & plain).

​additionally, this was used in the opening section to light the flute solely from the inside, so that the audience saw only individual tone holes lighting up when fingers were lifted; moved rapidly, this produced a rippling effect, similar to motive bioluminescence in sea creatures.

it was also discovered that the condensation produced & reduced by exhaling & inhaling into the flute mouthpiece could dim or brighten the camera display.

external LEDs: ​ several different external LED lighting sources were experimented with; in the end, two were settled on: a weak, circular 4 LED click-light, & a long rectangular 72 LED work-light.  these were used to create internal lighting effects inside the flute's body, passing light through the keywork into the flute, giving various effects when the keys were pressed, &/or when the flute was moved in front of the lights.  the difference in strengths of the devices was incorporated structurally into the work.

in order for the endoscope to function properly, external light (except that introduced deliberately via the keywork) had to be excluded from the flute; to this end, a wine-bottle cork was used to seal the end of the flute (different sealing materials turned out to affect the internal lighting reflectivity - in the end a synthetic cork tipped with tissue was selected).

sealing the end of the flute radically altered the sound - several notes no longer worked, others were changed in pitch, timbre or both; air sounds became altered, & special playing techniques (harmonics, multiphonics, etc) were all affected by this; these alterations directly influenced the pitch content of the piece, & the compositional structure. 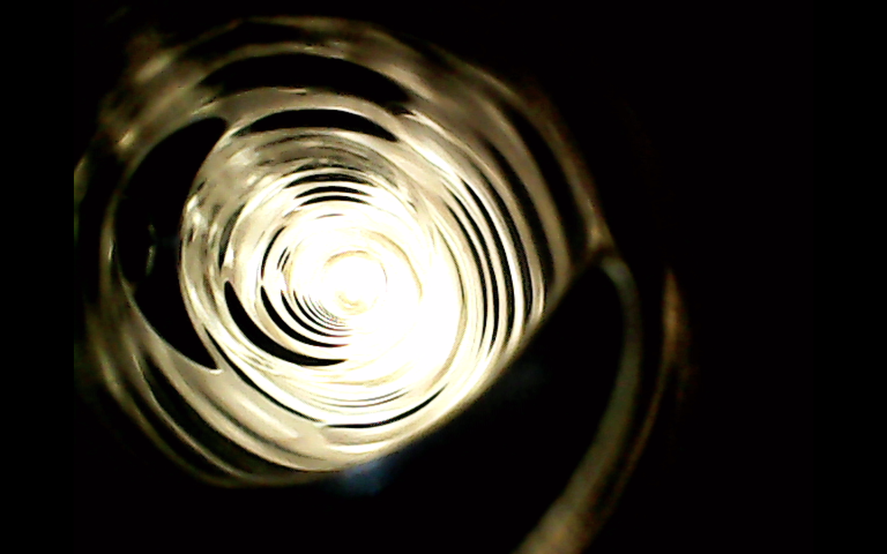